In my life I can only remember the election of two popes. And when pope Benedict was chosen I could, at last, be a spectator of this historical tradition. Everything was new for me, the white and black smoke, the “habemus papam“. The introduction of the new pope to the People. So I was curious how the election of the successor of Benedict would feel to me. It was, for me, actually more exciting then the first time. The smoke was white as the beard of Santa Clause. It was evening and the lights of  the Saint Peter’s Square reflected on people gathered there. When pope Francis stood on the balcony he presented himself immediately as a humble and accessible man. He wore only white and greeted the masses with a simple “buona sera”. Also the name he chose was a name of renewal and modesty. The saint Franciscus van Assisi even celebrated poverty as a way of living.  So I was really enthusiastic about this new pope in the way he presented himself. But when Jorge Mario Bergoglio stepped upon the balcony the marketing of pope Francis started. So how does the marketing of pope Francis work?

The problems of the catholic church

Actually maybe it is easier to understand what kind of problems is the Catholic Church facing at the moment. A lot of media have written about it before the election of the pope but it comes down to:

For more information on those issues some links: here, here and here.

The Relaunching of the catholic brand

But these list of problems can not hide one other big problem the Catholic Church has: it has an IMAGE poblem. The brand of the church has been tarnished by all those problems and the way it responds to them. It has no clear message and seems out of touch with society. So what to do? A relaunch of the brand was needed and I think with the choice of pope Francis they actually did a great relaunch. 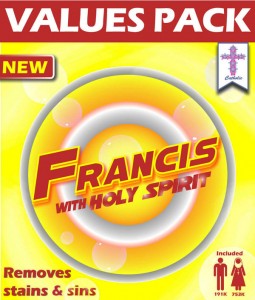 First of all people are visual creatures, an image is worth a thousand words. The new pope stood there with just his plain white clothing on, a way to show how humble he was and simple.  At this inauguration he rode around in an open popemobile, kissing a babie and blessing a disabled man. Two days ago pope Francis met pope emeritus Benedict. First was said that they would have a private meeting, but it turned out to be private meeting with cameras (read here).  At least two weeks of positive press coverage was established.

Soon after the name of the new pope was known the media started telling stories about him. I have read one story several times: he lived in a small apartment, cooked his own food and used public transport. These stories point out again that he is a humble man.  The other ones were his role in the Videla Regime and his fierce opposition of gay marriage in Argentina. The role in the Videla regime is downplayed as soon as the story broke (read here and here). And his views on gay marriage are different in private then the fierce opposition he showed in Argentina. He seems to support civil unions (read here). I can only see this as big public relations campaign to remove all the possible bad press about him and to enhance his profile as humble and pragmatic man.

But a relaunch of a brand also needs a new slogan. Here pope Francis excels. He has one clear message: Help the poor. He is saying it everywhere, anywhere, anytime. I think it is brilliant. First of all who can be opposed to helping the poor? Secondly it sends out a positive message. It makes people appreciate Pope Francis and the Catholic Church more. Thirdly it is an active message: Just do it. And fourthly it moves away the discussion about abuse, corruption and gays. Those subjects will pop up again but there is always that positive message to counter the negative one.

I do think that pope Francis and his public relations team have had a great two weeks. Great visuals, a fairly positive characterization of the new pope, and a new slogan.

I see some parallels with the launch of a new detergent and the launch of the new pope. Everybody hopes that the new product will clean out all the stains. So I made a package design as if the new pope was launched as a detergent. I choose the colors yellow, red and white because that are the colors you see often in the Vatican. The flag of the Vatican is yellow and white, and the cardinals wear red. The brand name is written upwards to give it speed. I put some bubbles on the package to associate it with cleanness. Furthermore I put in some extra slogans which you can read yourself. I also made a logo for the Catholic Church which is put on the package a as a seal of approval. I made this in illustrator and rendered it in Cinema 4d.

Update: I updated the Catholic Logo. The crosses were not properly aligned. 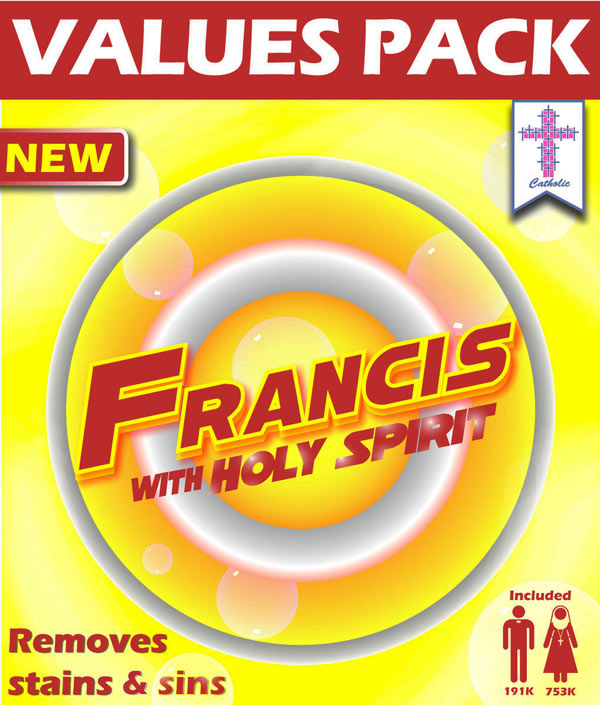 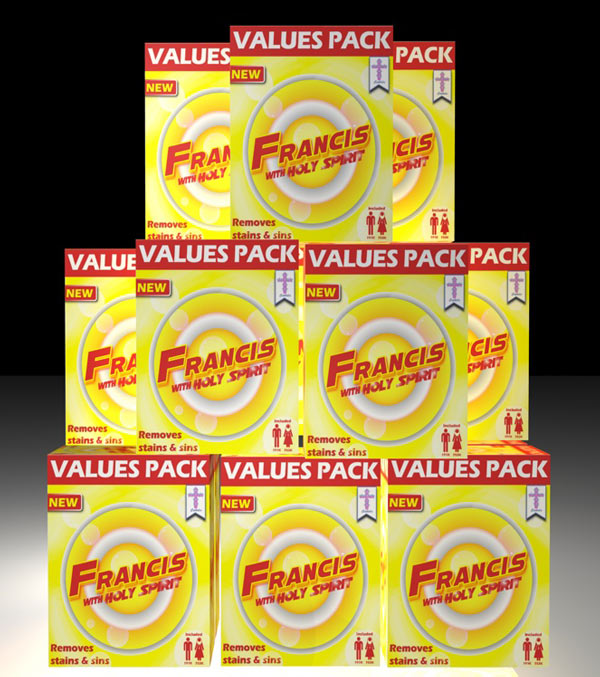