I have worked for 8 years in the museum world, so I have seen a lot of museums and their art. I like museums, I like what they do, represent and what they try to achieve. But museum have their constraints in the way they present their art. Sometimes museum feel like a police state, with signs, rules and guards. The most important rule is ‘Don’t Touch’. When a museum object is touched it can degrade the quality and the lifespan of the object. But I really would like to touch them, feel the paint or whatever the object is made of.

But there are museums where touching is encouraged. This are the so called interactive museums. Museum with a lot of buttons, touch screens and other touchy stuff. The touch provokes a reaction. Most of the time a movie plays, music plays, some light turns on, etc.

These schizophrenic approach to touch in museums inspired me for my own work of art called ‘Do Not Touch”. As you can see it is a wall of big red buttons. There is a big sign ‘Do Not Touch’. It perfectly illustrates the dilemma. I would connect the buttons with a counter at the entrance of the museum. Just a big red (nixie) counter with no explanation, so everyone who knows can see how many times the buttons are pressed.

A possibility could be to not show the “Do Not Touch” sign but just the name of artwork on a small text the way the museum shows the title of all artworks they have on display. I think a lot more people would press the button then. It is more subtle, but less explanatory.

Here are two renders of how my work of art would look in a museum setting. 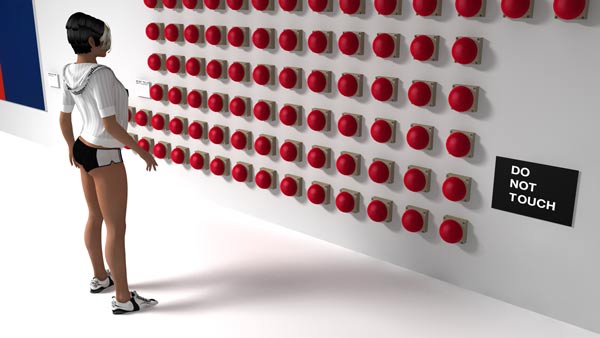 Here is an example of a nixie counter I would use at the entrance.